Describes the activity undertaken at UVic Libraries to improve description of Indigenous people, communities, and resources.

UVic Libraries has begun to update its subject headings, guided by a set of Principles (themselves informed by UNDRIP and other documents) that prioritize respect, diversity, and improved representation.

With that in mind, UVic Libraries will begin by addressing problematic Library of Congress Subject Headings (LCSH) in describing Indigenous-focused material. Note that these changes will be made as much as possible to subject headings under UVic Libraries' control. However, descriptions for resources are quite often not controlled by UVic Libraries - including much of the data in Summon which comes from various publishers and vendors. We are also working with them to advocate for improved subject practice for indigenous communities.

If you have any comments, questions, or suggestions for improved representation of Indigenous communities (particlarly from members of those communities), please contact Dean Seeman, Head of Metadata at UVic Libraries (dseeman@uvic.ca).

There are three major phases to this work - each encompassing a differenty type of Indigenous Subject Heading.

Although we think this is an improvement we also recognize that this edit may not always be a perfect solution in every case.

UVic Libraries feels it is also important to retain the history of how we have described this material and not erase our former practice. In order to do this, the former "Indians of North America" headings will not be deleted from our descriptions but will be moved to another part of the descriptive record with a note attached "Heading retained by UVic Libraries for historical purposes:". These former headings can still be searched via keyword or as a subject in our catalogue.

The previous subject "Indians of North America--Medicine" can still be searched as a subject and can be viewed by selecting "Staff View": 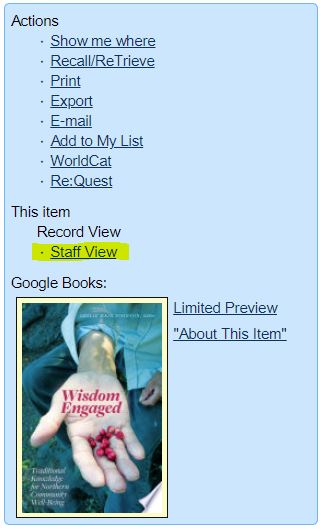 And we can see that the previous subject remains - searchable but hidden from view:

In order to retrieve all titles that have either the old (Indians of North America) or the new (Indigenous peoples) subjects, we recommend that you perform an advanced search:

Status: Preparatory work in process. Changes not yet made.

Other Library of Congress Subject headings also include the word "Indians" such as "Indian art," "Indian school children," and "Indian authors" will be examined individually and replaced with more appropriate subject headings.

This work will be described here when it has progressed further.

Status: Preparatory work in process. Changes not yet made.

The Library of Congress Subject Heading list does not accurately represent individual Indigenous communities. The word "Indians" is still the prevalent way of describing communities in LCSH and the names used for the communities are frequently not representative of what the community calls itself. Not only is the term "Indian" outdated, but often nations themselves are utilizing names consistent with their own histories that need to be accurately reflected within our databases. Examples of inaccurate language in LCSH are "Nootka Indians," "Squamish Indians," and "Comox Indians."

UVic Libraries recognizes that this is unacceptable and will be working to edit these subject headings to better reflect how communities wish to represent themselves.

This work will be documented here as progress is made.