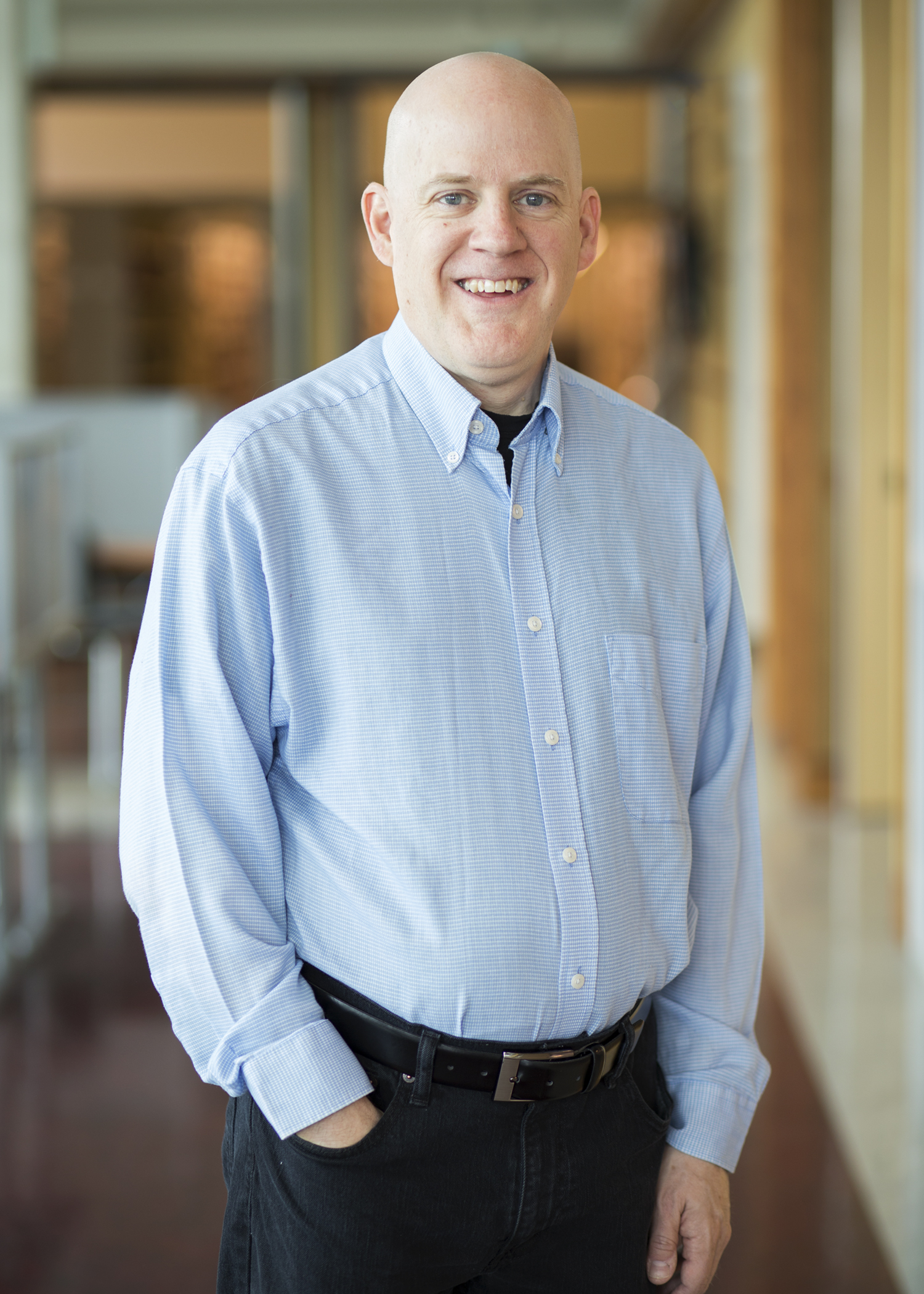 The film collection is housed at the Music and Media desk. Currently there are over 10 000 films primarily in DVD and VHS format and the collection includes documentaries on a wide variety of subject, feature films, foreign films, operas, and other topics. We also provide access to several streaming video databases and some individual streaming films.

This Guide is designed to help you navigate the film collection at the University of Victoria and to provide information on other related subjects such as copyright.

The Canadian Copyright Act permits instructors to show any film in the classroom, as long as the work was legally obtained. Instructors can also screen films outside of the classroom, provided that the screening is on campus, and for educational use, and that the audience consists mainly of UVic students and faculty. Streaming services such as Netflix cannot be used in an educational setting as these services are licensed for home use only.

For more information on copyright and video https://www.uvic.ca/library/featured/copyright/faculty/videos/index.php

Showing a film in class (for faculty)

If you want to reserve a film for a class viewing, you may book the film through our Booking System. For more information on this service go to our Book a Video page

When a film is not available in a streaming format.

When videos are not available commercially in a streaming format it may be possible for the Library to digitize and make available an existing DVD in our collection.   The Libraries have created the following guidelines to facilitate this process. If you have more questions about this contact Bill Blair (blairw@uvic.ca)

To find videos in our library catalogue (www.uvic.ca/libary), use the Books and More tab, select Keyword Anywhere and limit by Videos / DVD.

You may also search for videos through the Video Search Module.

This is a list of our subscription - based video streaming resources. As films are licensed for a specific period (usually one year), the content may vary from time to time.

To search for other individual streaming films: choose Books and Media; Search in: keyword (choose your keywords); limit: streaming media. 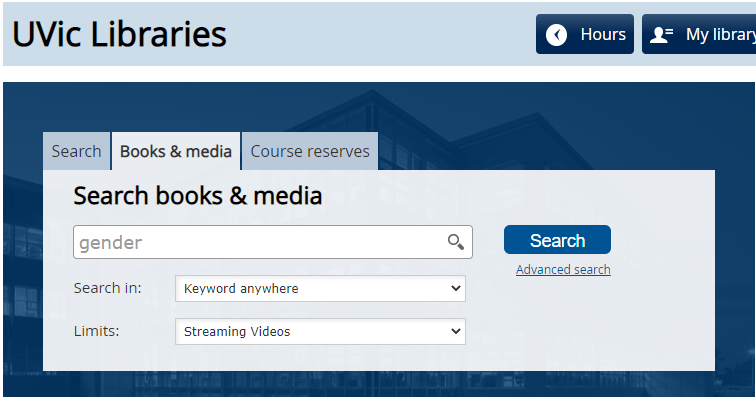 Note: all films are streaming unless indicated otherwise

1491: The Untold Story of the Americas Before Columbus
This 8 part series tells the story of Indigenous peoples of the Americas before the Spanish explorer Columbus arrived. All eight parts are linked in the catalogue record

Another word for learning
Aisha, an Indigenous girl living in Vancouver's Downtown Eastside, navigates the pressures of conforming to a colonial education system by exploring alternative forms of learning which connect to her culture.

The Body Remembers When the World Broke Open
This film centres on the chance encounter between two Indigenous women with drastically different lived experience while navigating the aftermath of domestic abuse.

Call me human
Innu writer Joséphine Bacon is part of a generation that has lived through significant changes in Indigenous traditions and colonialist displacement. Born in the Innu community of Pessamit, Bacon was sent to residential school at the age of five and spent fourteen years of her life there. Now, with charm, grace, and quiet tenacity, she is leading a movement to preserve her people’s language and culture.
This endearing film moves with Bacon across Canada — Montreal, Pessamit, and the tundra. In each place she visits, Bacon shares reflections and stories, back dropped by the film’s stunning cinematography. The contrasts between city and wilderness mirror Bacon’s upbringing, creating a poignant sense of the displacement she and her generation experienced. At the same time, the film offers a moving, inspirational meditation on the interconnectedness of language, earth, spirituality, and culture.

Inuit Lands, the melting point (DVD)
After spending 1950-51 with an isolated group of Eskimos in northern Greenland, sharing their life at the very edge of survival, Jean Malaurie and his companions returned to Thule village to confront a U.S. Air Force base under construction. When he returned to the Arctic in 1972, the base had irreversibly transformed the Eskimo (Inuit) culture. The film continues in Malaurie's footsteps and exposes the changes affecting the small hunting and fishing communities of northern Greenland today, including globalization, market economy, exploitation of its natural resources and climate change.

Presents the story of Wilma Mankiller, who became the Cherokee Nation's first female Principal Chief in 1985. Mankiller overcame sexism and personal challenges to fight injustice and give a voice to the voiceless.

One day in the life of Noah Piugattuk
Noah Piugattuk's nomadic Inuit band live and hunt by dog team, just as his ancestors did. When the white man known as Boss arrives in camp, what appears as a chance meeting soon opens up the prospect of momentous change.

Sisters Rising
Sisters Rising is the story of six Native American women fighting to restore personal and tribal sovereignty in the face of ongoing sexual violence against Indigenous women in the United States.

Starblanket : a spirit journey
At the age of 24, Noel Starblanket was one of the youngest First Nations chiefs in North America. At the age of 29, he became Chief of all Canadian Indians when he was elected president of the National Indian Brotherhood [now The Assembly of First Nations]. Outspoken, rebellious, and sometimes outrageous, he was the subject of a NFBC production in 1973. Now, three and a half decades later, he shares his own healing journey as he finds peace in returning to the teachings of the Elders, a greater appreciation of life through loss, and renewed hope for the future with the emerging Seventh Generation.

Utama
In the Bolivian highlands, an elderly Quechua couple has been living the same daily life for years. During an uncommonly long drought, Virginio and his wife (Sisa) must decide whether to stay and maintain their traditional way of life or admit defeat and move in with family members in the city.

What was ours
Like millions of indigenous people, many Native American tribes do not control their own material history and culture. For the Eastern Shoshone and Northern Arapaho tribes living on the isolated Wind River Indian Reservation in Wyoming, new contact with lost artifacts risks opening old wounds but also offers the possibility for healing. What Was Ours is the story of how a young journalist and a teenage powwow princess, both of the Arapaho tribe, traveled together with a Shoshone elder in search of missing artifacts in the vast archives of Chicago's Field Museum.

Link from the catalogue

This series includes:
A Broken Treaty - Episode 5: Elder in the Making Series As time passed, the Canadian government's perspective with regards to Aboriginal people changed. The Indian was now a problem needing a solution. What follows from the treaty signing is a genocide in slow motion. Elder Narcisse Blood shares his story growing up in residential school and the person he became.
Clouds of Autumn Set on the Tsilhqot'in plateau in the 1970s, Clouds of Autumn focuses on a young Indigenous boy named William and his older sister Shayl whose carefree childhoods are torn apart when Shayl is forced to attend a residential school.
Electric Pow Wow: A Tribe Called Red: W5 If you're an indigenous person living in a country that was forcefully colonized, it's all too common to find yourself underrepresented and misrepresented if not blatantly and systematically devalued and attacked. Positive role models and a positive self-identity are hard to come by, yet the Canadian DJ collective A Tribe Called Red, is a modern gateway into urban and contemporary indigenous culture and experience, celebrating all its layers and complexity.
Mistissini Healing Mistissini Healing tells the story of two Cree young women who are healing from the intergenerational trauma they experience living in the isolated James Bay Cree community of Mistissini, Quebec. Survivors Maryjane and Dayna rise from unfortunate circumstances and find hope, inspiring them to work to improve their community for future generations on a reserve still struggling to cope with the appalling legacy left behind by Canada’s Residential School system.
Residential Schools: Truth and Reconciliation in Canada Interweaving archival footage with poignant interviews, this video gives an overview of the history and subsequent impact of residential schools in Canada.
Resolute It was a forced relocation to assert sovereignty that led the Canadian government to commit one of the most grievous human rights violations in Canadian history. Zipporah was a girl when her family was among the eighty Inuit to be sent to the high arctic, but she remembers vividly the anger when her father realized he had been duped.
The Grandfather Drum The Grandfather Drum is a timely film about the dispossession of Indigenous ceremonial artifacts. The film tells the true story of a First Nations elder. After his grandson dies, Naamowin builds a healing drum to restore balance and connection to his community. The program explores the heritage of colonialism and the subsequent trauma still deeply affecting First Nations communities.
The History of Treaties in Canada From the Royal Proclamation of 1763 to the implementation of the modern-day Algonquin land claim, The History of Treaties in Canada explores the history, application and legacy of these foundational legal documents and how they continue to shape and define the often strained relationships between First Nations and the Crown in Canada.
The Impact of Colonialism in Canada This film explores the history and consequences of the Canadian Government attempting to assimilate Canada’s Indigenous population.
The Road to Constitution

Truth and Reconciliation: The Legacy of Residential Schools in Canada

Truth, Dance and Reconciliation
The story of Canada's residential school system and its traumatic consequences is one of the darkest and most troubling truths about our history, but the Royal Winnipeg Ballet suggested an unlikely - but powerful way for the country to learn and heal from decades of pain.

This documentary explores the one-year artistic gestation of the ballet through footage recorded at dance rehearsals, creative team gatherings, Aboriginal cultural retreats, and on opening night in Winnipeg.

Please contact us or drop by the Ask Us Desk
to book a viewing room. There are three rooms to choose from.